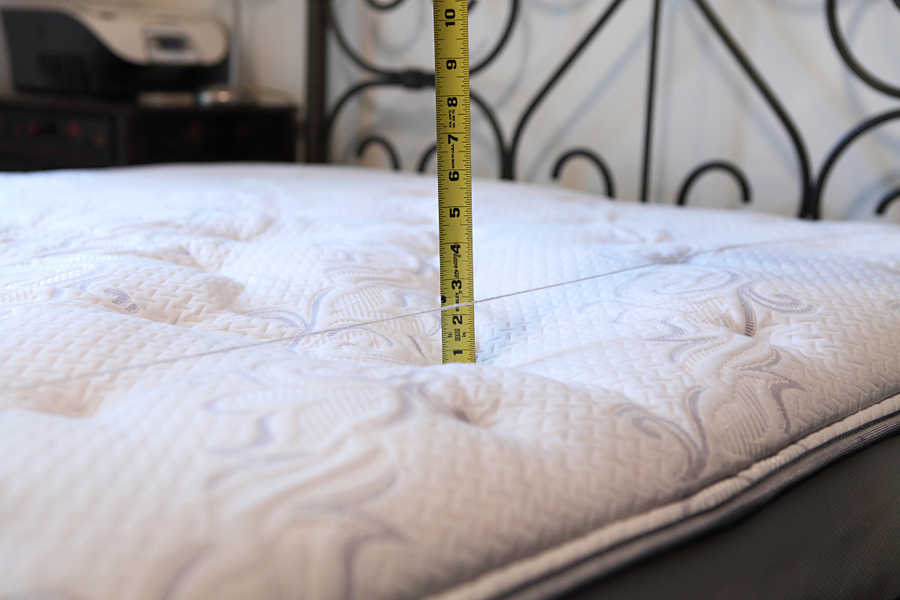 A mattress can go from fit to irregular. An irregular mattress can quickly be spotted by the indentation on one side or in the middle. The indentation or sinkhole can start to form at any time from a recently purchased mattress to one that’s several years old.
An indentation can be uncomfortable and hard on the back and neck. It can make the mattress hard to stay put on perhaps causing a sleeper to slide or roll off on occasion onto the floor.

The sinkhole, indentation, can be slowed down or prevented altogether by doing or rather cutting out doing a few simple things.

1) Avoid sitting on the bed repeatedly in the same spot-middle section.

2) Avoid sitting on the bed repeatedly in the same spot-side section.

3) Avoid jumping on the bed repeatedly in the same spot-middle or side section.

4) Avoid sitting anything bulky and heavy on the bed for prolonged lengths of time.

By following 1, 2, 3, and 4 it can help to maintain an even weight distribution on the mattress. When sitting, jumping or placing bulky heavy things on the bed the weight begins to sink down into the mattress unlike lying in bed where weight is distributed and balanced more equally.

If the mattress has a sinkhole there are a couple of things that can be done to give the mattress a longer life.

Number 5 can be used as a preventative measure or after a sinkhole has formed.

5) Use a mattress topper.

Several toppers may have to be used to even out a sinkhole.

6) Use a comforter or bedspread.

To fill in an existing sinkhole, fold a comforter or a bedspread in half and then fold the half in half. Continue folding halves until the comforter or bedspread is small and yet large enough to place inside the sinkhole. A comforter will probably be large enough but several bedspreads may have to be used.

7) Flip the mattress over.

There are two sides of a mattress and both sides can be used but once there is a sinkhole on both sides it may be time to buy some mattress toppers or a new mattress.

If there is a sinkhole on both sides of the mattress and a new mattress is out of the question try sleeping on the opposite side of the sinkhole. Place the feet where the head would normally rest or sleep diagonal across the mattress.

We are a participant in the Amazon Services LLC Associates Program, an affiliate advertising program designed to provide a means for us to earn fees by linking to Amazon.com and affiliated sites.
Scroll back to top